Thought you might like to see Tucker aka Trekker. We adopted him about 2 1/2  yrs. ago. I think you may remember I mentioned he would be the lucky dog of the year with summers on a lake and winters in the foothills.

I think he may have been a problem child and hard to adopt with a few annoying bad habits. These pics show he did indeed adapt well and enjoys the good life. He loves his stuffed bears and loves to sleep in front of the pellet stove, even better with the sun shinning on him. 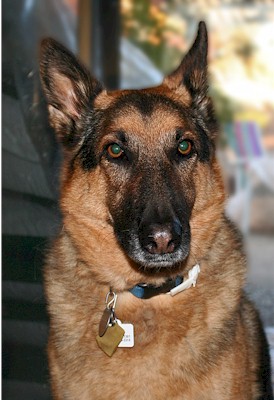 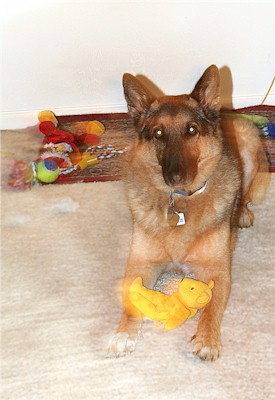 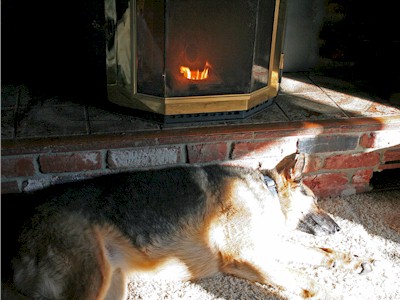 February 2011
Tucker's favorite spot right in the winter - right in front of the stove! 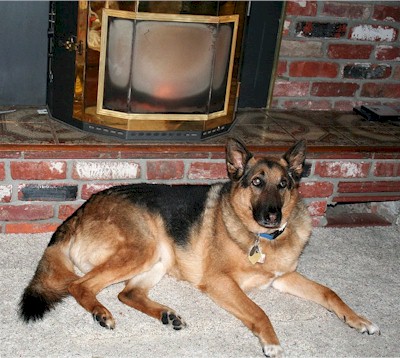 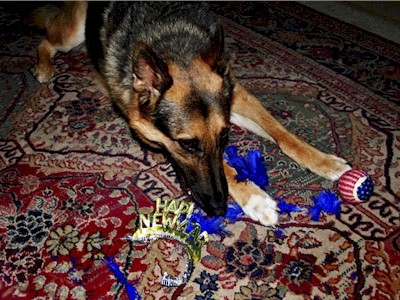 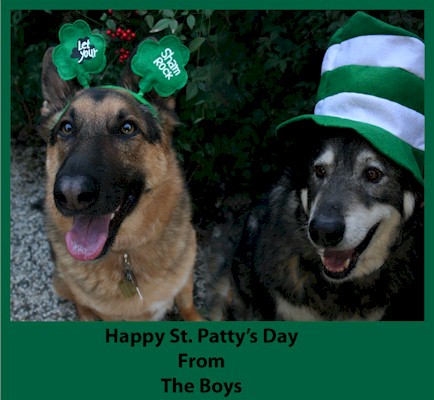 Thought you might enjoy this. This morning it was cold enough to start a fire in the wood . I used one of those propane fire wand sticks to get things going.   Tucker was lying in front of the stove and enjoying watching the flames and we heard an explosion. He had chewed the propane  reservoir in the back of the fire stick. It exploded in his mouth and did nothing more than scare the hell out of him. We could have had a dog that disappeared in a puff of flames. He does keep us busy.

This is one shot of Tucker where he is not in constant motion. He loves cleaning up the micropopcorn bag

Tucker has brought so much joy and happiness to our lives that I'm thinking of fostering another GSD. Our old dog, Hunter, is a 10 yo Great Pyrennies Mountain Dog mix. He is in decline and we dread the day that he will leave us, but that will leave room for another lucky dog to replace him. A foster dog will be the 2nd luckiest dog in the world, Tucker being the luckiest. We currently are in Minnesota and will be back to Cali in mid Oct. Maybe we can make room for a foster then. My big fear is that we will not want to give a foster up to someone else. 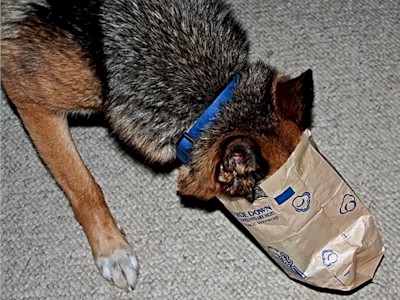 In March I adopted Trekker. We changed his name to Tucker. I think I told you that he would be the luckiest dog of the year. That is certainly true. We feel very lucky, also. Tucker traveled back to our cabin on a lake in northern Minnesota in late May and he did great traveling in a crate in the back of our camper shell. He loves it here. He can chase rabbits. deer, and mallards but never seems to catch anything. He loves boat rides more than car rides and is like a shadow. He has no trouble spending the day on a boat fishing.He does hate thunderstorms and can feel when they are coming. He is friendly and not intimidating when he meets strangers.

Both of are lives are enriched and blessed. He is home. I think you may have had some problems placing him, but he is a gem.

Its hard to get a good pic of Tucker. He is always moving. He really loves it here. Complete freedom. He stays in the unfenced yard most of the time and does not wonder away.Loves boat rides and sits in the boat waiting for a ride. He did meet Mr Skunk one morning but it wasn't too bad. 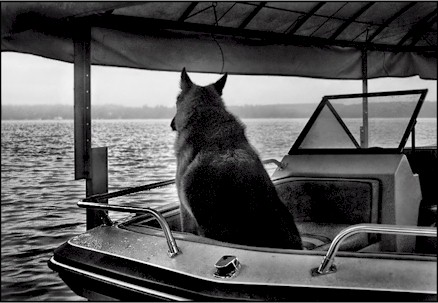 Trekker is a handsome young man, around 18-24 months old and on the smaller side for a male, around 70-75 pounds. Trekker is always dressed in his finery with a white bib and spats over his very plush, classic black and tan coat.

This fellow is affectionate, curious and active, with a great sense of fun and a twinkle in his eye. He'll talk up a storm when getting a good back scratch, and the further back you go, the more he'll talk.

He wasn't well-socialized to other dogs as a youngster, so he's having to learn social skills with other mature dogs. He loves to play with the girls, but isn't always comfortable around other males. He's a bright boy, and will settle into a routine with a minimum of fuss. He has learned to go right into a crate and stay quietly for a while. He loves going for rides, but if he's left loose, nothing is safe. He wants to explore EVERY inch of the vehicle and get into EVERYTHING. This boy has intense prey drive, so no little furry critters or livestock for him.

Trekker needs more work on obedience and house-manners. He appears to be housebroken, but isn't trustworthy not to get into things. Like all young dogs, he needs more socialization with people and other dogs. He was evidently allowed to play rough with his mouth when he gets excited, so he still needs to learn that gnawing on humans even in fun isn't appropriate. He needs to learn to settle down when he gets wound up,  and he'll sometimes nibble back when getting scratched. He needs a home with adult-sized people who understand how to control mouthiness.

Trekker is looking for an active home with an experienced owner, only those with a sense of humor need apply! With someone who understands how to bring along a bright, curious young male with lots of training and socialization, he'll be a fun and clever companion.

NO CATS, SMALL ANIMALS or LIVESTOCK. 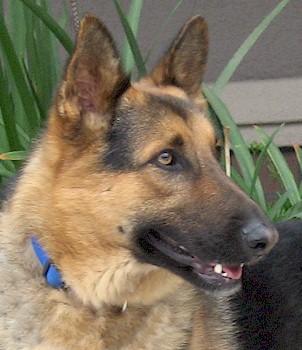 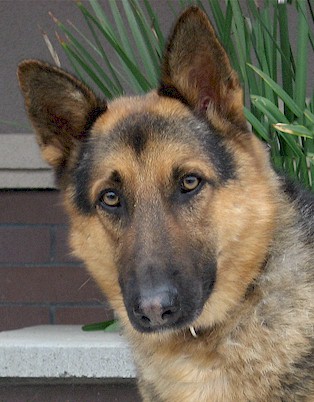 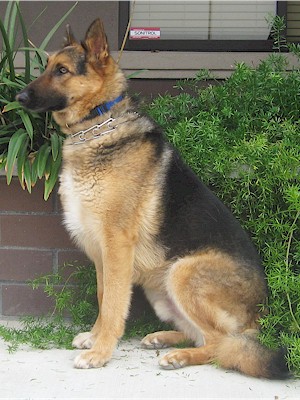 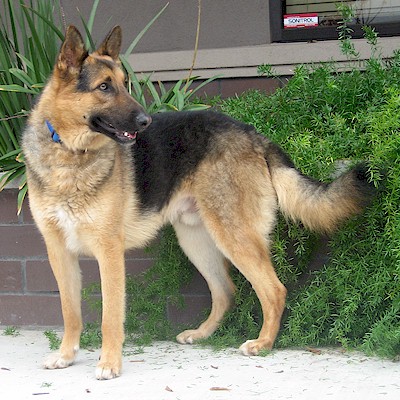 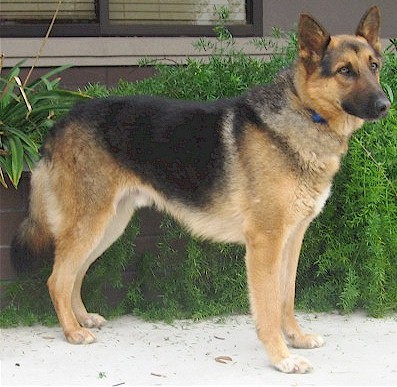 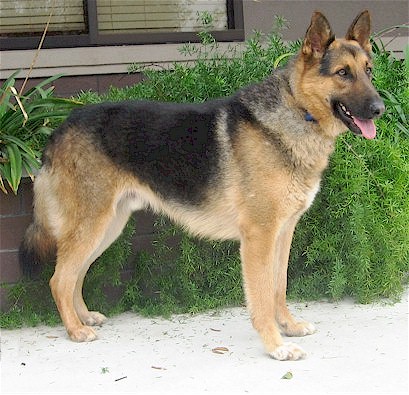 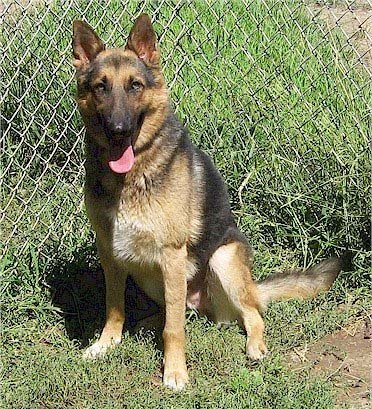 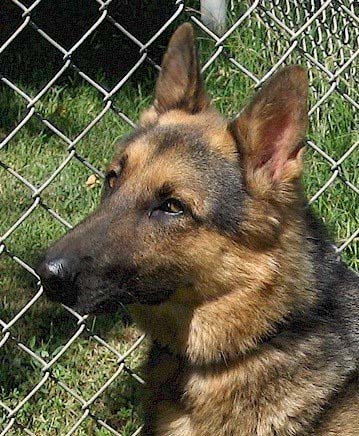 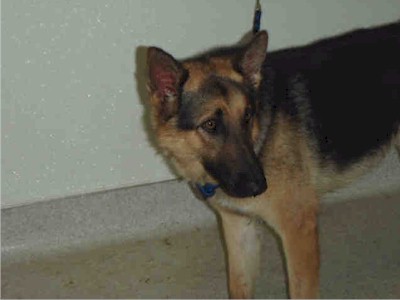