Earlier this month, we debuted in Open (the intermediate level of AKC Obedience). Dante went 3-for-3, earning his Companion Dog Excellent (CDX) title in 3 straight trials across 2 weekends, winning a 2nd place and two 1st places along the way. So, the next weekend we moved up to the Utility level (the advanced level of AKC Obedience).

There were 3 trials held in one weekend -- Saturday am, Saturday pm, and Sunday. And AGAIN Dante qualified in 3 straight shows, winning 1st places each time and his Utility Dog (UD) title in just one weekend. With my previous two German Shepherds, it took me more than 20 trials to earn our UD title, and the average pass rate typically requires more than 25 trials to earn a UD. Dante showed amazing consistency and a determination to get the job done! In less than 10 months, Dante has earned 5 separate Obedience titles -- Companion Dog (CD), Graduate Novice (GN), Graduate Open (GO), Companion Dog Excellent (CDX), and Utility Dog (UD), as well as two High In Trials (HIT). This is truly amazing, considering Dante just turned 3 years old this month. Gotta love that German work ethic! ;-)

For the next phase of his Obedience career, Dante will continue to compete in the Open B and Utility B classes. These are the same exercises, but the other competitors are dogs that already have their CDX and UD titles too. So, how well we do will depend on how many other dogs we're able to beat at that level. The more wins we get, the more points we'll accumulate. These points will not only count toward a potential Obedience Trial Champion (OTCH) title, but also could help us qualify for the National Obedience Invitational (NOI). To get an invitation to the NOI, we would have to be one of the top 3 German Shepherds in terms of OTCH points for the year. Wish us luck! 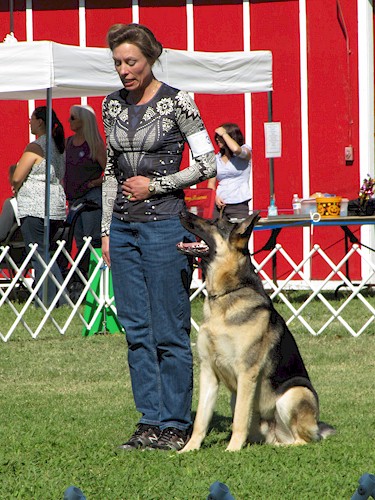 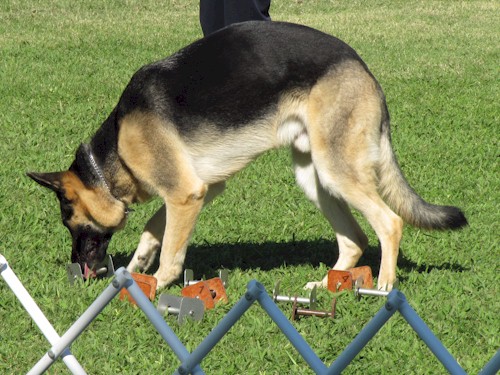 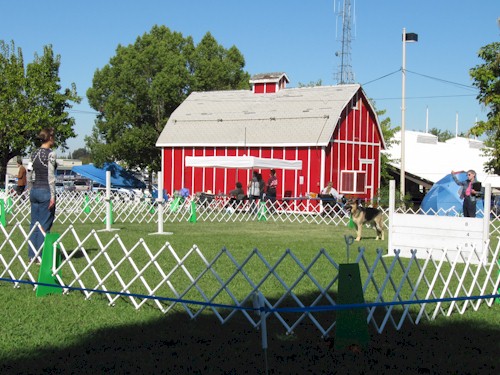 Just wanted to say "hi" and to give you the latest update on Dante's continuing Obedience career. Last weekend we were competing in a regional Obedience event in Reno. On Saturday, Dante took High In Trial (HIT) with a 198.5 in Novice B. That day we beat a former National Obedience Champion (again), as well as a number of other strong competitors who have previously gotten OTChs and perfect 200 scores. So, it was pretty tough competition.

Now that Dante has his CD title and has won another HIT, he's no longer eligible to compete in Novice B. I was keeping him in Novice as long as I could, so he could gain trial experience before moving onward. I have him entered to debut in Open at a trial in September. We've trained through Utility, so hopefully if he gets his CDX fairly quickly, we can continue on showing him in Utility later this year.

Dante's temperament and structure are wonderful. Everyone compliments me on what a nice and handsome boy he is. He is easily jumping his full jump height and is so well put together. He is about 2 3/4 years old now, and all filled out (28 inches at the withers and 90 pounds). And that protective guard dog instinct comes pre-baked in with these GSDs. But at the same time he's sweet and gentle with children and small dogs. He has nice manners and was a perfect embasador for the breed while we were staying at the hotel in Reno. There was even a cat on a leash in the lobby of the hotel which he looked at but ignored! I can't tell you how pleased I am with him. :-) 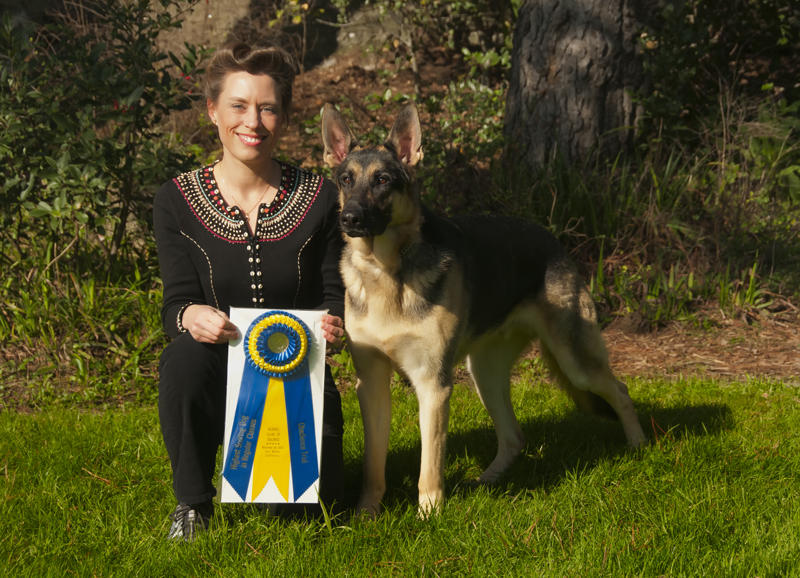 Dante recently competed in three days of Obedience trials, debuting in the Novice class. He won his Companion Dog (CD) title with three excellent qualifying scores. Out of a perfect score of 200, he earned 198, 199, and 194.5.  His 199 score tied with two border collies who also earned 199s in the advanced classes that same day. To determine the High in Trial winner, all three dogs needed to perform an additional heeling pattern run-off. The other two dogs happen to be Obedience Trial Champions (OTCH), and their handler has previously won the National Obedience Championship (NOC). You can imagine our surprise when Dante amazingly won the heeling run-off against some very seasoned competition that day, thus winning High in Trial.

We are very proud of our rescue boy. Dante is a solid working dog with a great temperament.

We have high hopes for his continued career in Obedience, with our goal to compete at a national level in the future. Thank you, GCGSR for saving such a wonderful dog! 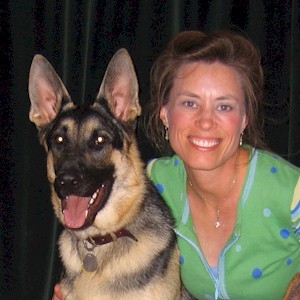 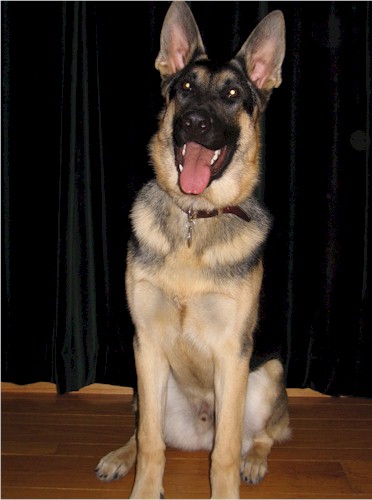 I wanted to give you an update on Dante (Connor). We just LOVE him. He is growing into such a gorgeous, well-tempered, intelligent boy. I'll forward you a few pictures, so you can see how he's grown and matured.

Dante is still learning the "fundamentals", but is catching on quickly.

Connor is a huge 5-6 month old puppy, already close to 60 pounds with immense bone and a glossy dark black and tan coat. He's got a whole heap o' growing still to do, and should mature into a very large, impressive male at close to 100 pounds. He was an unclaimed stray so nothing is known of his background.

This gorgeous youngster is fairly calm, with moderate energy and a very stable disposition. He's very well-socialized to both people and other dogs, and fits right in with any pack. He's outgoing, friendly and affectionate, but he is still VERY much a big puppy. He chews on anything not nailed down and with typical puppy curiosity, gets into everything. He's not quite housebroken and still has the occasional nighttime accident if left loose. He still needs work on staying quiet in the crate at night. Unknown how he is with cats.

Connor is learning basic manners and is pretty well-behaved overall. He still jumps up some and needs a little work on his leash manners and obedience training. Like most growing youngsters, he constantly thinks he's starving and will try to confiscate any other dog's food or bones, and can be a bit grabby with treats. This boy will need leadership, structure and obedience training as he matures.

Handsome Connor is looking for a home with an owner who is experienced raising big German Shepherd boys, and another dog pal to play with. He's off to a great start in life, he'll need someone who can keep him socialized and well-adjusted and he'll be a true ambassador for the breed.

Connor is located in the Modesto area. 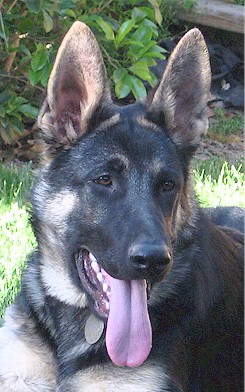 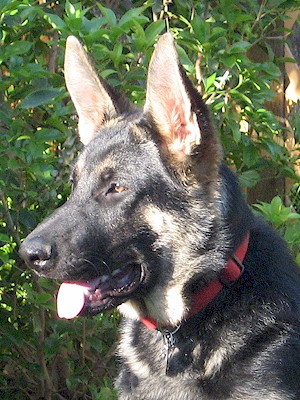 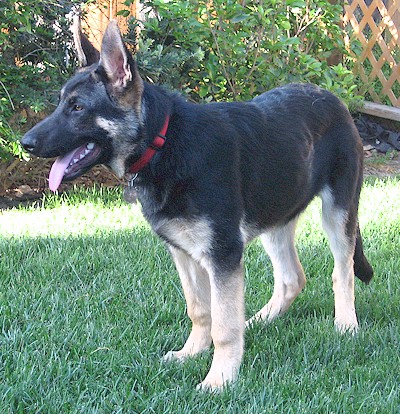 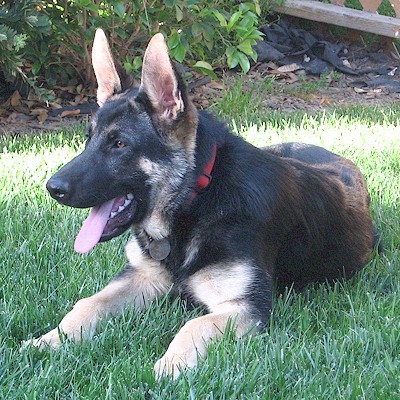