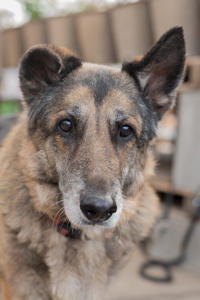 Momma Mia, aka Mia, is a black and tan female who is approximately 10 years old weighing about 65 lbs. She came into rescue from a local area shelter so little is known of her background.

Mia was found at the shelter curled up on a bed in the corner of her run. She had just arrived at the shelter about 12 hours earlier and the shelter thought she was 13+ years old due to her poor body condition. She would not approach the volunteer calling to her from the gate of the run, so he went in to meet her and was greeted with a roll over for a belly rub. He complied and Mia gladly accepted the lead and went to the play yard. Under evaluation in the play yard, she was in very poor body condition with a wobbly back end, two-to three-inch-long nails and mammary tumors which had to weigh 5-10 pounds. She was so sweet and nice the volunteer couldn't leave her at the shelter, so he asked to foster her for the shelter until her stray hold was up. No one came to claim Mia, so she is now in rescue.

Mia has had her mammary tumors removed, which were benign, she's had all four feet nail trimmed to get her nails back to a normal length and is now a perfect weight. Mia does have arthritis and takes anti-inflammatory meds and still has a bit of a wobbly back end. Her wobbly back end is much improved with daily walks and playtime with the two puppies she's been fostered with.

Mia is an absolute doll and house princess with impeccable house manners and is an amazing companion pet. She will be your shadow and follow you everywhere, then plop on a bed and curl up for a nap. At some point in her life, someone worked with her as she knows all the basic commands and will work for treats and she loves to be trained!

She might be a house princess, but she wants to go, go, go. She wants out of the house and to be part of the world. She loves her walks and to be taken to pet friendly establishments. Everyone who has met Mia loves her and she just eats up the attention.

Mia is being fostered with a bunch of GSDs, resident and foster, and gets along with all, but she has a special affinity for puppies. Her foster dad has had two puppies since Mia came to his house and she's become best friends with both. She loves to play with them and you would think this girl is six years old when she's playing with the puppies.

The ideal home for Mia would be a home who wants a turn key, lovely companion pet who wants to go everywhere with you and when done, snuggle up in the nearest bed. She seems to enjoy the company of the resident dogs and playful young dogs, but we believe she could be an only dog.

Even though Mia is older, you would be missing out if you don't look at this girl! 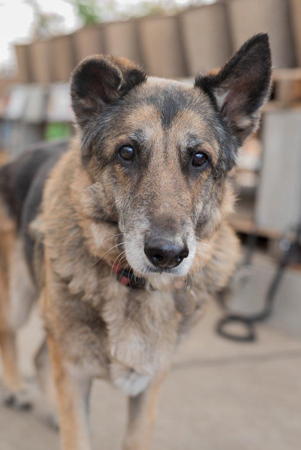