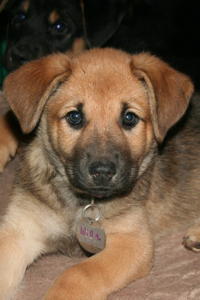 Willa is an adorable sable female with one ear standing. She came into this world on 7/24/21 born to Amelia and surrounded by six brothers and a sister. We named the litter the Aviation litter and each had a name related to a pilot or astronaut. Originally Willa was one of the larger puppies and played very rough with her siblings. Now in a foster home as the only puppy living with an adult female German Shepherd and a large adult male German Shepherd, Willa acts more insecure and runs if they try to engage her in play.

She is on her way to being housebroken and sleeps through the night in a crate. She loves being with her people. She tends to follow the female Shepherd around and it has helped her explore the yard. Once Willa is comfortable in her surroundings and with new people, she engages and wants attention. A home with another confident male would be ideal for Willa. As a puppy, she still has a short attention span and will randomly chase after a leaf or butterfly when outdoors. She still jumps up on people and is beginning her chewing stage, so lots of toys to distract her is critical. Willa loves stuffed toys, balls and chew toys. She has begun chasing and chewing on her tail. We correct her whenever we see it, as it can be a bad habit/cycle for her to get into. She spends a great deal of her day sleeping as she's growing like a weed.

She is still too young to be spayed or have her rabies vaccine, so a potential adopter will have a longer trial period as she must be spayed before she can be fully adopted. During that time, we expect her to continue her socialization with people and other dogs and begin her basic training. 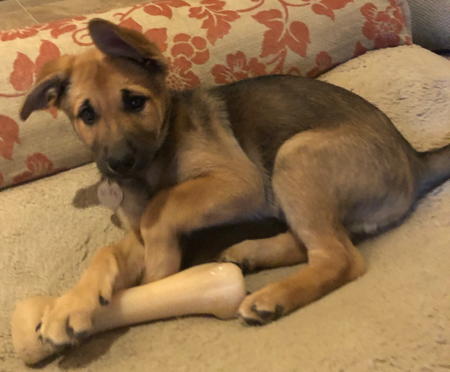 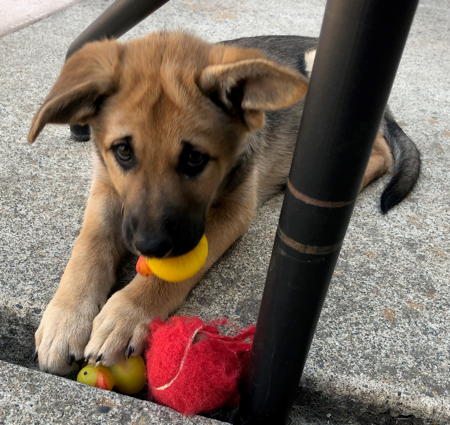 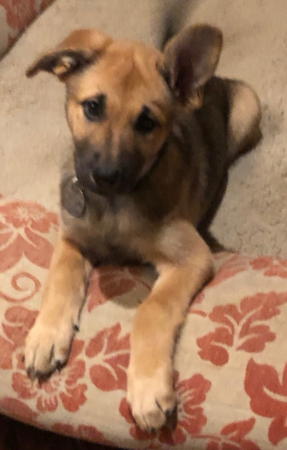