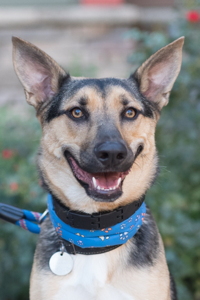 Huck is an approximately 5.5 month old male black and tan puppy who looks to have some Cattle dog and maybe some other small breed, which keeps it interesting. He was a stray from a local shelter, so we have no history on him. He's very small and currently underweight at about 20 lbs. He is a a picky eater and so far, raw food seems to be what he prefers and will keep him healthy. He's shy when meeting new people and new dogs, but once he's comfortable, he'll seek his human out for attention and follow them. If you prefer a small to medium sized German Shepherd, Huck may be the one.

When he first arrived, a 3 month old female German Shepherd pup who played very rough was constantly trying to get him to play. Huck hid from her for several days, but after about 5 days, he tried to reciprocate the play. She was then placed in a new home so his playmate closest in size is no longer here. He does his best to play with the 90 lb male German Shepherd in the foster home (see picture). He received a stern correction from the adult female German Shepherd and he knows to stay clear of her or roll over to show his submissive side. He was not a fan of the big rain storm that passed through here, but has done fairly well with his housebreaking skills otherwise. He is sleeping through the night in a crate.

Huck has some adult teeth coming in but has a few more to go and likes to find things to chew on. He's found chew toys and other chewables like bones and Nylabones are good options. Huck met the resident cat who hid under the bed. He was very curious but did not show any signs that he would harm her. Huck is a very sweet boy and loves his cuddle tome. Formal training and continued socialization will make this sweet boy into a great companion for some lucky home. 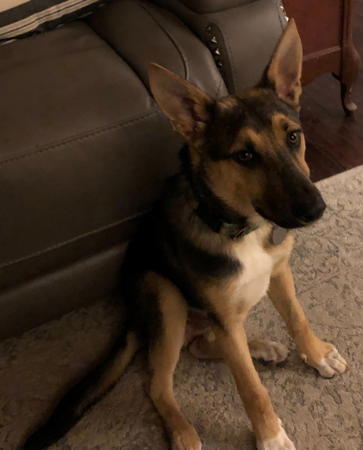 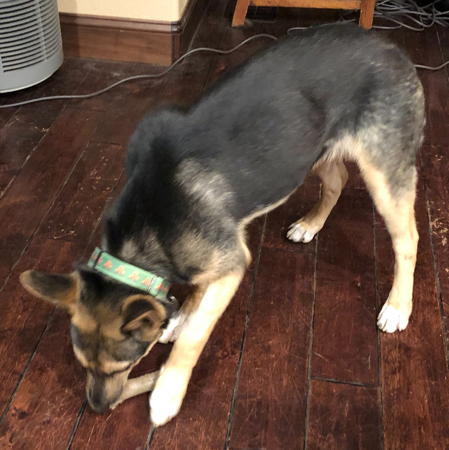