Tucker was in his Foster-to-Adopt home and went in for hip screening x-rays, it turned out he had one dysplastic hip that was asymptomatic. We opted to do an FHO (femoral head ostectomy) on him several months later once his growth stopped. We had just enough funds left in our Rainbow Fund!

Tucker is a handsome young male, around 9-10 months old, in a shiny, jet black coat. He has immense paws and huge bone, and will be a huge boy when he's all grown up. He was an unclaimed stray from Modesto.

His easy-going nature and sweet temperament are hard to beat. He's affectionate without being sloppy or clingy. He's a laid back kinda guy and gets along with everyone and everything he's met so far, including cats.

He's learning manners and obedience, and is very easy to train and correct. As long as he's given some leadership and guidance, he'll be an outstanding ambassador for his breed. 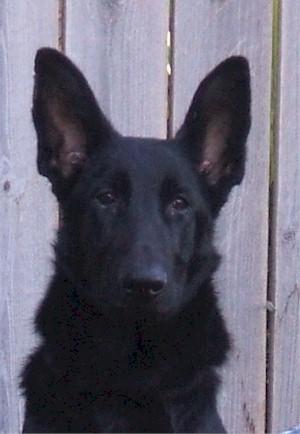