We took the dogs and stayed a few days at Bodega Harbor with the grandkids in June. It was Angus (Tango) and Dolly's (Dahlia) first time at the beach. They were not too impressed with the ocean, but they loved the easy digging in the sand and made themselves a little dog fort under a driftwood log. I've attached a couple photos for you.

Angus is about 80lbs plus now and Dolly is staying at about 50lbs. Dolly turned 1 year in July and Angus is now estimated to be about 8 months old. Angus loves a ride ..... any ride. Dolly is the vigilant one that is always alert to do her job. She takes the protection of us and the property seriously, but with caution. Angus lounges on the porch and lets her do the rounds along the fencelines, but comes running if she needs him (typical guy). The vet thinks he may grow more ........ Okay ........ possibly 90 to 100 lbs. They are both very intelligent and obedient dogs and have fit very well into the family. They love all the grandkids .... all ages, and they put up with us old folks too.

Hope you are having many successes with finding homes for the wonderful dogs that you rescue.

Thanks for your good work. 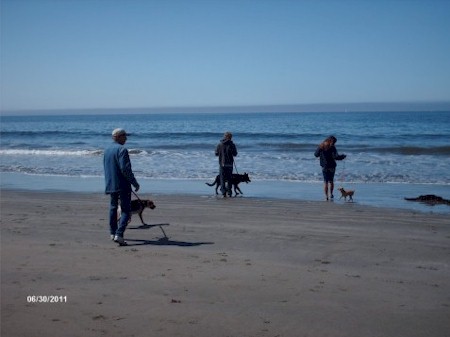 Attached are some pictures of Angus (formerly Tango) who is now 5 months old and up to 48 lbs.  He is getting lean and big and losing the puppy roundness and fumbly tumble toed ways.  He is very loyal to us and sticks close by wherever we happen to go on the property.  He has learned about all the animals and sounds that come with living in the country and has accepted everything with intelligence and bravery.  The vet says he may get up to 90 lbs.  He is a very handsome guy!

The pictures also include Dolly (Dahlia) who we adopted in November 2010 and is now approximately 10 months old.  She weighs about 46 lbs and is probably close to her maximum size at this point.  She is all energy and is a fast girl and loves to go after the squirrels in a team effort with our Chihuahua Caesar.  Dolly and Angus roll and tumble in puppy tussles in the grass and play tug-a-war with any old stick they can find.  All three dogs are bonded together now and make the rounds along the fence-line every morning and night.  We have a good pack!  Thank you for bringing us all together!!

Hope you enjoy the photos. 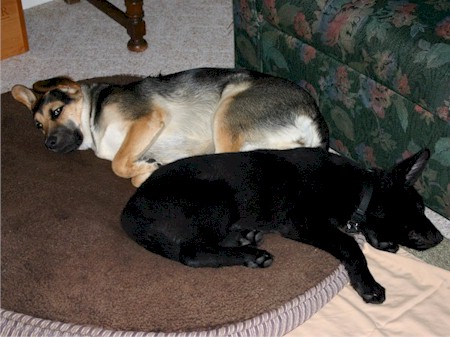 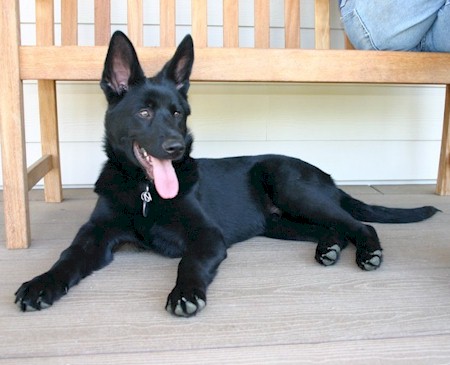 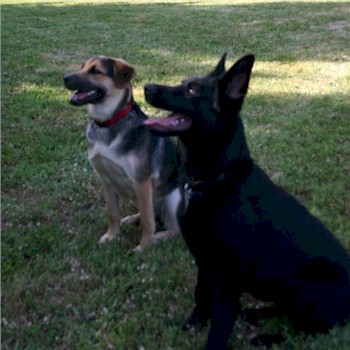 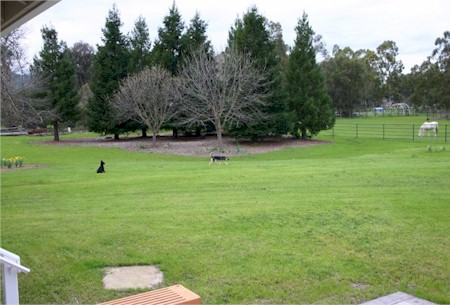 Tango and his 5 brothers are Velvet's puppies, found abandoned at around 4 weeks old. These wonderful boys were probably born in mid-January and are about 9 weeks old, and ready to take on the world. Although they are being trained, the boys are not housebroken yet.

Tango is the only solid black pup in the litter. He has upright, alert ears and intense focus. He is usually the first through the door, will tell you loudly that he wants in, and was the first to figure out the dog door. He plays with the ball, the rope, cat toys, slippers, anything he can get his puppy teeth on.

Tango likes to play with the big dogs, but prefers his human, and he is protective of "his" human. Tango needs firm rules and boundaries or he could take over the house. This affectionate but bossy little guy is friendly with every human and animal he's met. 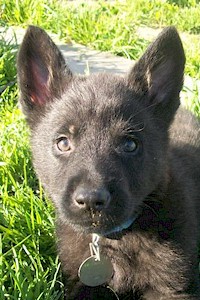 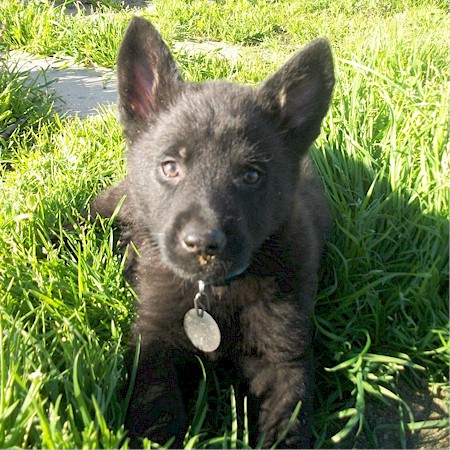