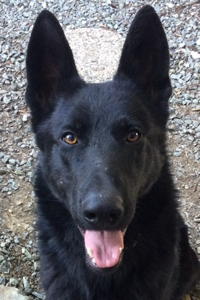 Gill is a bi-colored (mostly black with four black and brown boots with a touch of white under his tail) 72 pound male German Shepherd, approximately 18 months old. He was surrendered to a local animal shelter so nothing is known of his past.

Gill responds to correction quickly and is not possessive of toys so he plays really well with other large dogs. He is nicely housebroken in a house with a flip screen with access to the backyard. He knows some basic commands, is learning to heel now and is very food motivated.

He is still coming out of his puppy stage, so he is also learning not to put his teeth on people. This isn't a problem at his current foster home because there are firm boundaries and rules. He does sometimes play with your belongings, just being silly. Gill has medium energy, rides well in the car and is learning the go potty command. He is currently living in a foster home with 1 male and 1 female German Shepherd and loves to play with them. Gill is crate trained and sleeps throughout the night very quietly in his crate, in the same room as the other dogs (who are crated at night).

This sometimes shy boy would love to be adopted by a gentle person who can also provide structure and rules. Lots of new experiences and obedience training are recommended to help him with his confidence. 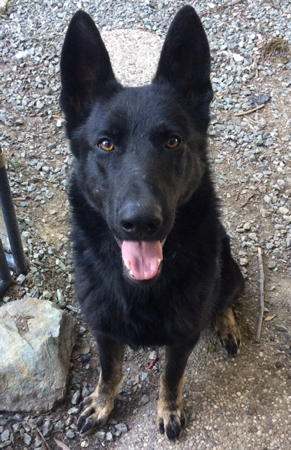