Frijole aka Bean is a 1.5 year old male dark sable Malinois that has spent a good portion of his first two years visiting the shelter. Eventually his owners did not reclaim him, leaving him there for over 30 days. Upon evaluation, Beans foster mom realized how special this boy is and how he deserves much more! Bean is currently recovering from a injured foot, which is expected to make a full recovery. He also had a lower canine tooth removed as it was broken to the root.

At the shelter, Bean was in playgroups with other dogs. He took a strong liking to the girls but got along with all other dogs in the play group. Despite Bean's very social personality with other dogs, he will not tolerate being 'picked on' or 'bullied' by other dogs.

Bean loves his people and is also very social with strangers. He would love a home where he could be with his people and accompany them on vacations or even going out to a brewery! When leaving the shelter he said 'hello' to all the shelter staff. Bean's foster mom trains dogs professionally, so he's finally getting some obedience under his belt with things such as leash manners and house manners. He loves attention of any kind, often nudging your hands for pets, leaning into you or going between your legs for head scratches. Bean loads nicely into a crate for down time and sleeps there quietly over night. True to his Malinois nature, he does have typical Malinois energy. However, unlike the standard Malinois, Bean lacks ball and toy drive. He does enjoy working for his kibble. He is a smart boy so having daily mental (and physical) stimulation will be a necessity. Bean is a large dog, who knows his strength and isn't afraid to throw it around when initiating play, so a home with no small children is recommended. Bean needs someone who is experienced and is going to continue his training, socialization and be a strong leader. Bean's final adoption comes with a free training session donated by his foster mom. No cats or small furry critters. 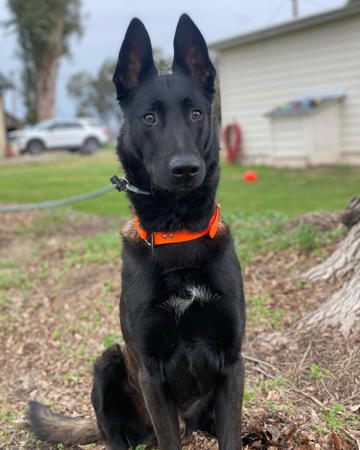