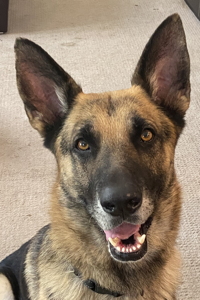 Tuke (pronounced like Duke only with a T) is a nice big black and tan fellow. He is approximately 5 years old and weighs in at about 90lbs. Tuke found himself in a local area shelter around the 4th of July. As a stray nothing is known about his background. In the days following the 4th, we learned that Tuke does not like fireworks, and did escape his foster home's yard for a few hours while his people were out, but did come back to the porch about 3am and bark to be let back in.

Tuke is a sweet guy that comes with some skills. He is housebroken, he knows some basic commands, and he walks fairly well on leash, only taking minor corrections to keep the big guy from pulling. He has also gotten along with all the large male and female dogs in his foster home. He also apparently was let on the furniture in a previous home as he thinks he should be able to jump up on the sofa and settle in next to you. At first Tuke was none too happy about having his collar grabbed to remove him from the sofa, and could be a little reactive. Now he will only occasionally try to get up there and will get down with a strong verbal command. Tuke prefers to sleep free on a dog bed at night but will reluctantly go into a crate if asked.

Tuke is a bit of a nervous boy at first, which led to some challenges with him the first couple of weeks. At first, he really didn't like to be confined. He broke out of both crates and a less secure kennel in his foster home. Once in a secure kennel he destroyed a couple of dog beds, but now that he has been in the home a few weeks, he is settling in nicely. He still doesn't care for the kennel but will go in if persuaded. He is also starting to be left free in the home with the resident female dog and has been successful up to 4-5 hours without his human. With continued success, a full day in the house without supervision will be in his future.

During the first few days, Tuke could be reactive to meeting new people. With a slow introduction, he has warmed up to everyone he has met so far. He is now meeting people nicely at the house, and out on walks.

During the first couple of weeks if you went to grab his collar to correct him (off the sofa, time to go outside, etc.) he could become a little reactive. Having Tuke drag a leash that you grab until he settles into an established routine works well with this boy.

Now that Tuke is settled and in a routine, he is a great companion to his people, and is starting to engage with the other dogs. He gets to "work from home" with his foster dad one day a week and is starting to play with a young female in his foster home. While Tuke is still occasionally unsure, he now looks to his human leaders or the other dogs to help him figure out the right thing to do.

Tuke is a great dog but needs an experienced owner that can help him gain confidence and be firm with boundaries and rules. He will be a great companion for the right person/family. Tuke would love a home with a female dog to help show him the ropes.

No small children for this guy. 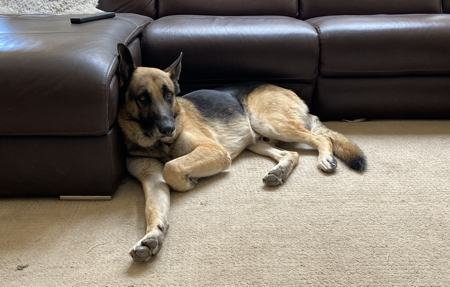