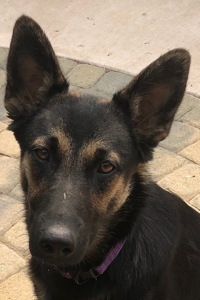 Leona is a 7 month old small black and tan female weighing about 35 lbs. She was a stray from a local shelter, so little is known of her background. Based on her odd stance and gait, we asked for X-rays and learned she has two fractured pelvic bones. The right side appears worse than the left and she is scheduled at UC Davis for a Femoral Head Ostectomy aka FHO on 9/24 for the first side to be done. About six weeks later, she will go back to have the other side repaired. Rehab involves no impact and little movement for the first 1-2 weeks with more distance being added as she tolerates it beyond the initial weeks. Because she is young, we expect her to bounce back fairly quickly. Long term, it's best to not allow any high impact activities until she has built up muscles and shows no pain. If you are up to the rehab, Leona can go to a Foster-to-Adopt home anytime.

This girl is growing, but will likely remain a petite girl. She knows sit, is almost housebroken, sleeps nicely in a crate at night and is learning leave it, go away and the place commands. Leona loves human affection and once she's warmed up to new dogs, enjoys hanging out with them too. Playing with stuffed toys, chewing on nylabones and playing in water are some of Leona's favorite past times. She will chew on a shoe, chair leg or seat, dog bed, toilet paper, the carpet or whatever is nearby if not supervised closely. She is curious about the resident cat, but does not want to do her any harm. Outside, she can entertain herself with a tennis ball or another dog. She will alarm bark if she hears a stranger walking by, especially if with another dog.

The name Leona is derived from "lioness." On initial meeting, this girl tends to snap at the face of other dogs. So far, she's been given a puppy pass by the dogs she's met, but consistent, serious corrections are needed to let her know it is not acceptable as she will not fair well if a dog retaliates. Once she's accepting of another dog, she plays and harasses the young 3 year old male in the home. There is a 6 year old female and a 13 year old male German Shepherd also in the home, but they don't appreciate her puppy energy.

Leona could be fine as an only dog as long as she has her human around much of the time. Further training and regular exercise will go a long way for this fun little girl. 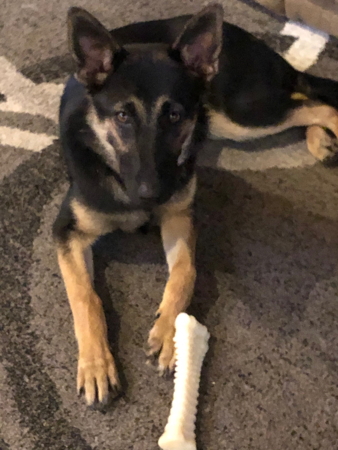 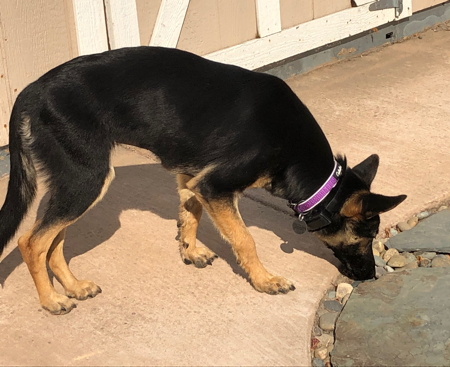