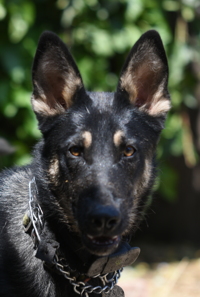 Dashell aka Dash is an approx. eighteen-month-old black and tan male who came from a local shelter as a stray, so there is nothing known about his background. He is a sweet boy who is still all puppy in personality. When he first came into rescue, this boy chose his canine pack mates over human companionship. Initially he would shy away from people, and when humans came around, he would play 'chase', much like a child having fun. He was always comfortable around the other dogs, and little by little his curiosity and desire to be 'one of the guys' led him to seek attention from his foster family along with his pack mates. He has progressed from dashing away from human touch, to tolerating it, and finally to seeking it out and enjoying it. While still timid, his sweet and loving side is really starting to shine through!

In the early days in his foster home, his crate was his 'safe place'. He still likes to eat his meals in his crate, but he no longer retreats there. He will sleep in the crate, but he prefers to sleep with his pack mates and can often be found sharing a dog bed with his foster brother. He is house trained with use of a doggie door and has been left unattended with the other dogs in the home while his foster mom is at work. While he has not been destructive, he seems to find great satisfaction in swiping the occasional sock from the laundry basket. He is currently living with cats in his foster home and he does well overall but does occasionally need to be reminded to 'leave it' when he starts get too curious.

Dash is very playful and loves to engage in a game of chase with anyone who will participate. He rides well in the car and has been learning about the outside world - with each outing he gains more confidence. Dash would love a forever home with a patient family to continue his socialization and a patient resident dog to help teach this sweet boy how to be part of a family. 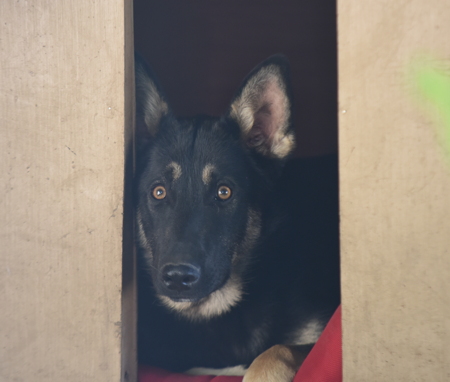